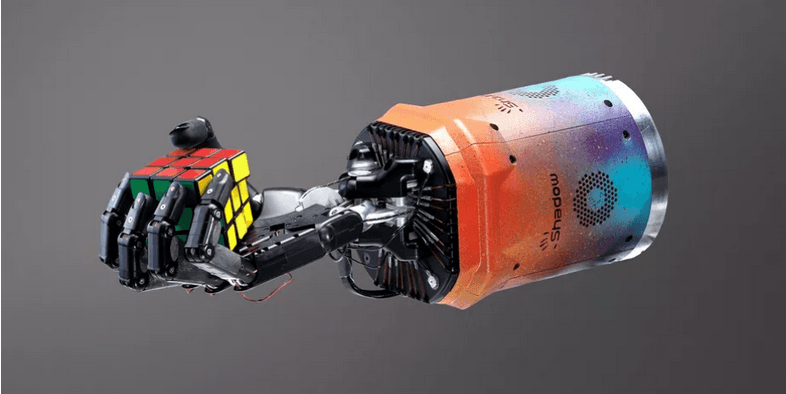 San Francisco-based artificial intelligence research company, OpenAI has built a humanoid robotic hand capable of solving a Rubik’s cube.  The development of the robot, Dactyl, marks a new milestone in the organisation’s quest for building general-purpose, self-learning robots that can learn to perform a variety of real-world tasks, without the need for months or years of training and specific programming. ‘We’re trying to build a general-purpose robot. Similar to how humans and how our human hands can do a lot of things, not just a specific task, we’re trying to build something that is much more general in its scope,’ said Peter Welinder, research scientist and robotics lead at OpenAI.

Dactyl was not explicitly programmed to solve the Rubik’s cube, nor was it programmed to perform individual motions, as OpenAI wanted it to discern these movements on its own. By giving the robotic hand the end goal of solving a Rubik’s cube, the group’s larger motive was to enable the hand to figure out on its own how to solve the cube under any condition. They employed modern AI – specifically a brand of incentive-based deep learning called reinforcement learning – to achieve this.

Dactyl is a 24-joint robotic hand modelled on a human hand, and in addition, the software that powers it was taught to utilise all of the joints in the way humans use it via hours of simulation. Finally, when given a real cube, Dactyl was able to put its training to use and solve it on its own, even under conditions it had never been explicitly trained for. It was able to solve the cube with a glove on, with two of its fingers taped together, and even with continuous interference by the team that poked it with various objects. ‘The robustness that we found when we tried this on the physical robot was surprising to us,’ says Matthias Plappert, Welinder’s fellow robotic team lead.

Although we still have a long way to go to achieve the level of sophistication of next-generation robots that can learn from their environment and work alongside humans in the real world,  OpenAI’s attempt to mimic the complexity of one human body part capable of learning and perfecting a new skill is indeed laudable.

Pritikana Karmakar is an experienced copywriter at Next Education. She is a part of the editorial team of The Next World magazine. She loves to read fiction, and has a research interest in speculative fiction, language and narratology.

Introducing TeachNext Hybrid, the classroom of the future! Create a seamless teaching-learning environment in any situation. Click to know more.

Take your school to the Next Level!